Track No. 1: Strategies for the diagnosis and management of retinitis pigmentosa

Retinitis pigmentosa (RP) is diagnosed in approximately one in every 4000 people, and it is one of the most common inherited retinal diseases in the world. It is characterized by the degeneration of rod photoreceptors.

Although most patients with end-stage RP are legally blind, the disease progresses to varying degrees of vision loss depending on genetics, penetrance, associated conditions, secondary involvement of the cone photoreceptors, and treatment. With the US Food and Drug Administration (FDA) approval of the Argus II Retinal Prosthesis (Second Sight) for the management of advanced cases, it is appropriate to review the latest strategies for the diagnosis and management of RP.

The diagnosis of RP begins with the clinical history and an examination. Typically, patients present with a complaint of night vision loss, although decreased visual acuity, bumping into objects, or glare are also common. RP is genetically linked, with 20% of cases being autosomal dominant (18 genes identified to date), 13% autosomal recessive (23 genes), and 8% X-linked recessive (2 genes).1 In dominant RP, some patients may ignore their symptoms, as they often observe them in other family members.

Some specialists advise limited testing for patients with RP because it may not affect management. There is also the concern that bright-flash photography may accelerate retinal degeneration.14,15 Ancillary testing, however, provides support for the diagnosis and can affect disease management. As shown in Table 1, we recommend a full spectrum of baseline tests, including fundus photography and fluorescein angiography (FF/FA), optical coherence tomography (OCT), Goldmann visual field (GVF), full-field electroretinogram (ffERG), and multifocal ERG (mfERG). 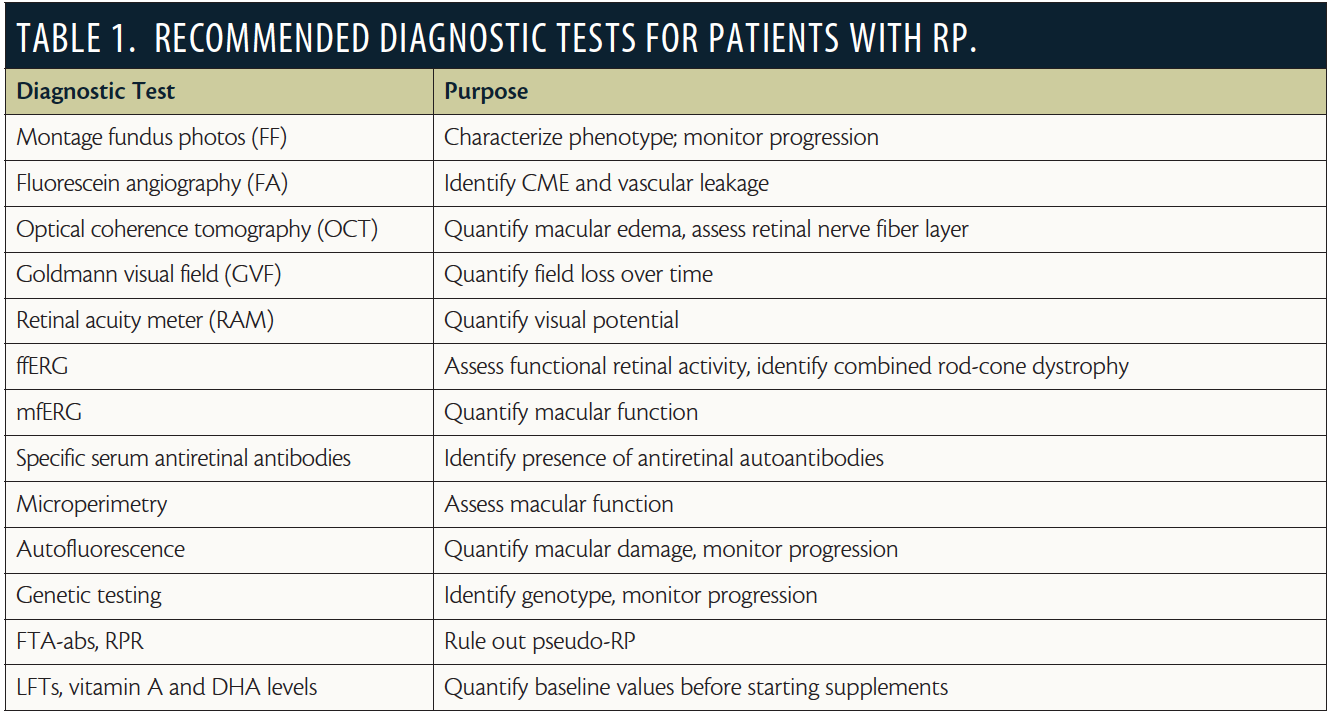 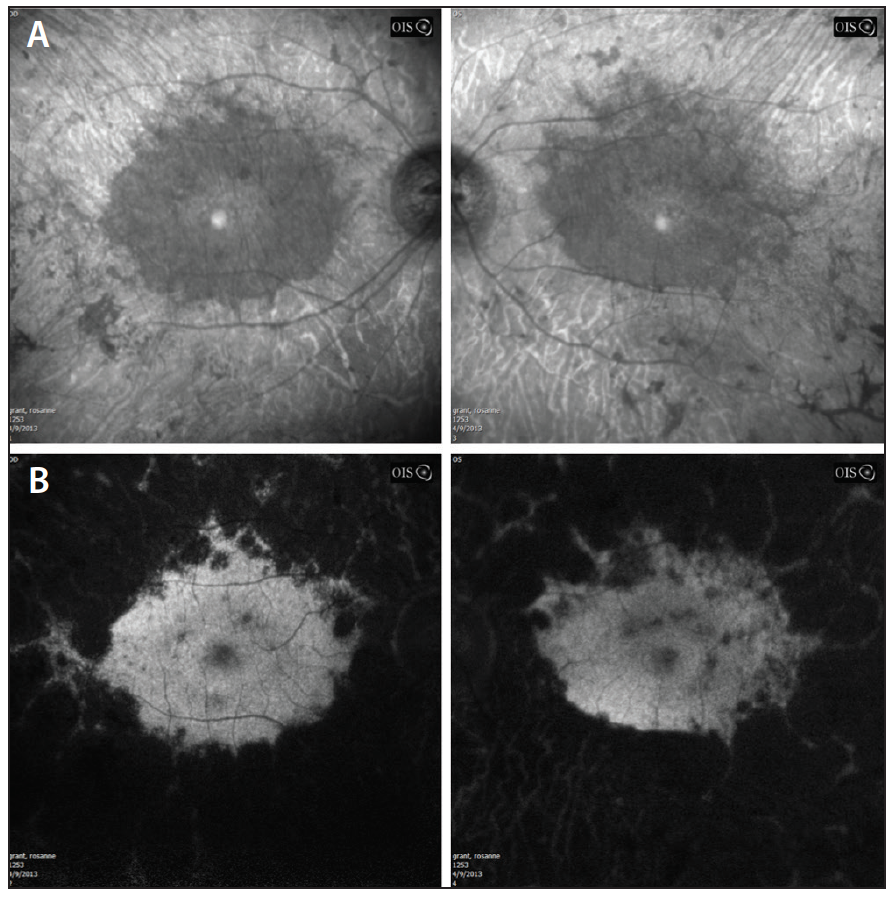 Figure 1. Red-free (A) and autofluorescent (B) images in a patient with advanced retinitis pigmentosa (RP) with visual acuity of 20/25 OD, 20/40 OS. Autofluorescence is used to help quantify the macular damage in RP.

Some clinicians recommend OCT testing alone to rule out CME, as OCT studies have been shown to be useful for both the diagnosis of CME and treatment response monitoring.16 Because there are cases of CME in the absence of frank cystic changes on the OCT, we advise that FA studies be performed in all cases. Montage fundus photos can document the distribution of phenotypic changes, and an FA will reveal CME as well as vasculitis, if present. Furthermore, it has been noted that 37% of RP patients and 90% of RP patients with CME have an autoimmune condition with autoantibodies to retinal cells, and a blood serum test for antiretinal antibodies can detect this.17,18

ERG testing is often underutilized. While the scotopic and photopic systems may be extinguished in advanced RP, ERG can be very useful in testing patients who are young, have incomplete penetrance, or have fundus changes, as well as for monitoring changes over time. Some patients do not exhibit frank changes of RP, in which case the suppressed scotopic response will support the diagnosis, particularly a decrease in amplitude and delayed b-wave response.19 An mfERG may also be used to assess peripheral macular function in cases where the ffERG amplitudes may be equivocal as the central-to-peripheral response difference can help in the diagnosis.20

Retinal acuity meter (RAM) testing is a critical aspect of evaluating retinal function in RP patients with cataract. PSC cataracts are often underdiagnosed and undertreated in patients with RP.8 Some clinicians assume that cataract extraction would be of limited benefit and may not carefully examine the lens with retroillumination for opacities. When an early PSC cataract is noted, they may assume that the retinal problem outweighs the cataract noted on examination. Although RAM testing can under- or overestimate the visual potential, it is still a useful tool that can estimate potential visual acuity following cataract surgery.

There are a number of recommended treatment options for RP patients with associated conditions, as shown in Table 2. Randomized controlled studies have shown that high-dose vitamin A (retinyl palmitate, 15000 U/d) slows the rate of vision field loss, and patients are 32% less likely to have a 50% or more decrease in ERG baseline amplitude per year.

On the other hand, high-dose vitamin E (400 U/d) may accelerate field loss, with a 42% increased chance of having a 50% or more decrease in patients’ ERG baseline amplitude per year.21 Patients with X-linked RP have significantly lower docosahexaenoic acid (DHA) levels than control subjects, and the administration of DHA (1200 mg/d) has been shown to lessen the rate of RP when given for 2 years with vitamin A.22-25 Lutein (12 mg/d), when supplemented with vitamin A, has lessened the rate of midperipheral visual field loss in nonsmoking adults with RP.26 Additionally, lutein and zeaxanthin may improve the macular pigment and reduce central vision loss.27

CME is prevalent in 70% of RP patients,6 and there are several treatment options. Oral carbonic anhydrase inhibitors (CAIs), such as acetazolamide and methazolamide, have been clinically shown to improve visual acuity, perhaps by stimulating fluid transport across the RPE.28-30

Both CAIs and intravitreal triamcinolone acetonide (IVTA) injections may improve macular edema and visual acuity in RP patients,31,32 but they can also result in rebound macular edema with continued use.31-33 In addition, topical CAIs, such as dorzolamide and brinzolamide, may reduce CME and be efficient. CAIs may also prevent apoptosis from carbonic anhydrase IV gene mutations.34 Some patients with RP appear to have vitreous inflammation with CME.32 The vitreous cells may be cell fragments from degenerative rods, but we believe there can be inflammation as well. In such cases, the sustained release of the dexamethasone intravitreal implant (Ozurdex, Allergan) has shown success (Figure 2).35 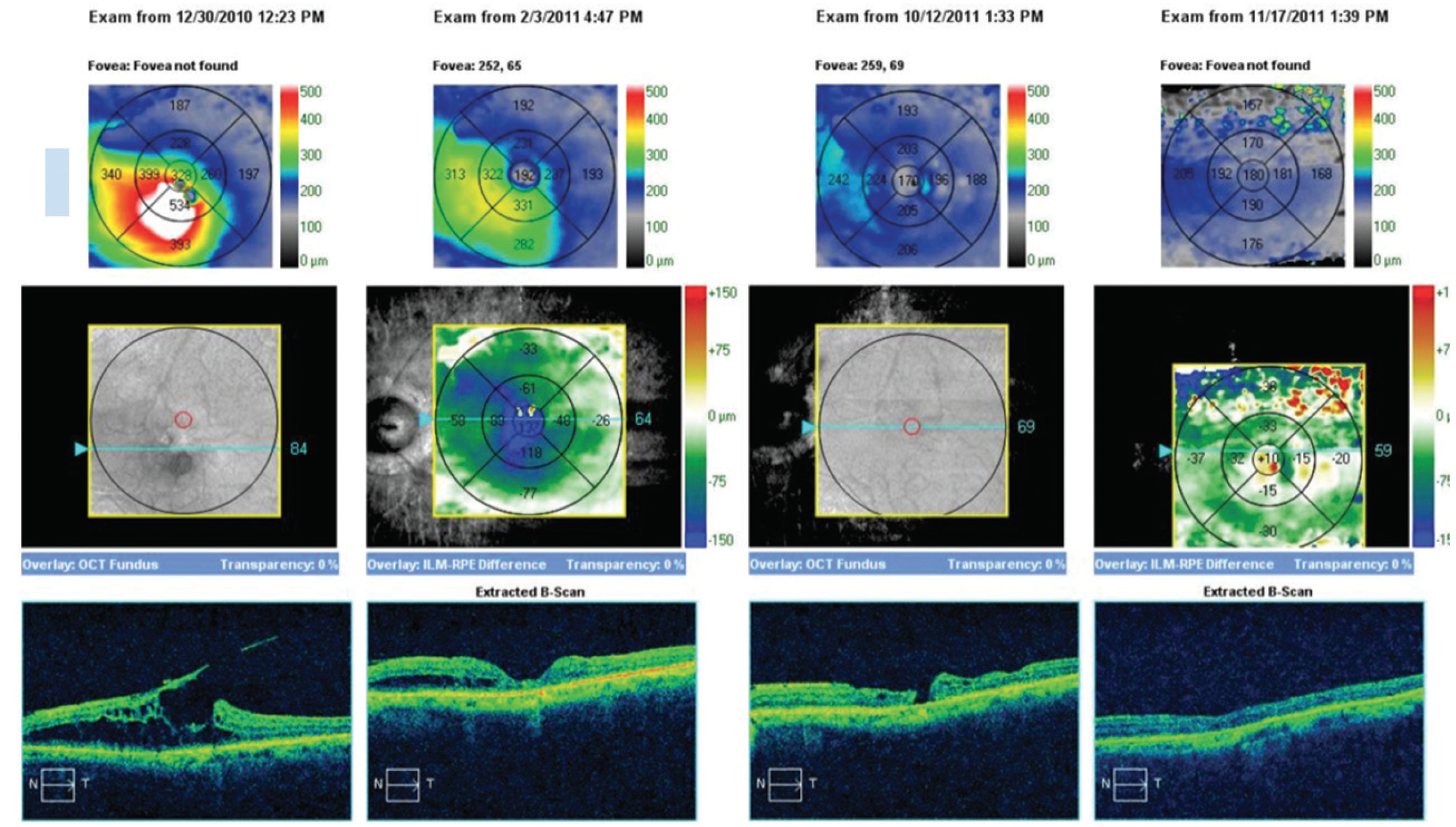 Figure 2. Pre- and post-dexamethasone intravitreal implant OS of a patient with vitreous inflammation, cystoid macular edema (CME), and retinitis pigmentosa (RP). Optical coherence tomography (OCT) studies showed a decrease in macular thickness, and fluorescein angiography (FA) studies showed a decrease in hyperfluorescence in late studies. The patient noted an improvement in corrected visual acuity from 20/50+1 to 20/30-2 OS. This is the same patient as in Figure 1.

An alternative is an IVTA injection, although this may be associated with a more severe pressure response and faster cataract formation as well as the potential for greater toxicity. Topical antiinflammatory drops, such as steroids and nonsteroidal drugs, may be beneficial, but controlled studies have not been performed. Although further research is needed, immunosuppressive therapy has shown long-term benefits for patients with autoimmune retinopathies and could be considered for RP patients with antiretinal antibodies.36

Anti-VEGF injections should be administered for RP patients with choroidal neovascularization. However, the usage of bevacizumab (Avastin, Genentech) is controversial for the treatment of CME. There is one negative report37 and one positive report38 demonstrating a decrease in macular thickness and improvement in visual acuity in RP patients.

Although there are limited positive results, anti-VEGF drugs could reduce macular edema without the risks of steroids, including cataract and glaucoma. They may also be useful for patients who do not fully respond to CAIs. We have found short-term but limited long-term benefits for those patients receiving sequential injections. Vitreomacular traction (VMT) and macular holes may develop in RP patients, and standard pars plana vitrectomy with membrane peeling may be used to restore vision (Figure 3).12 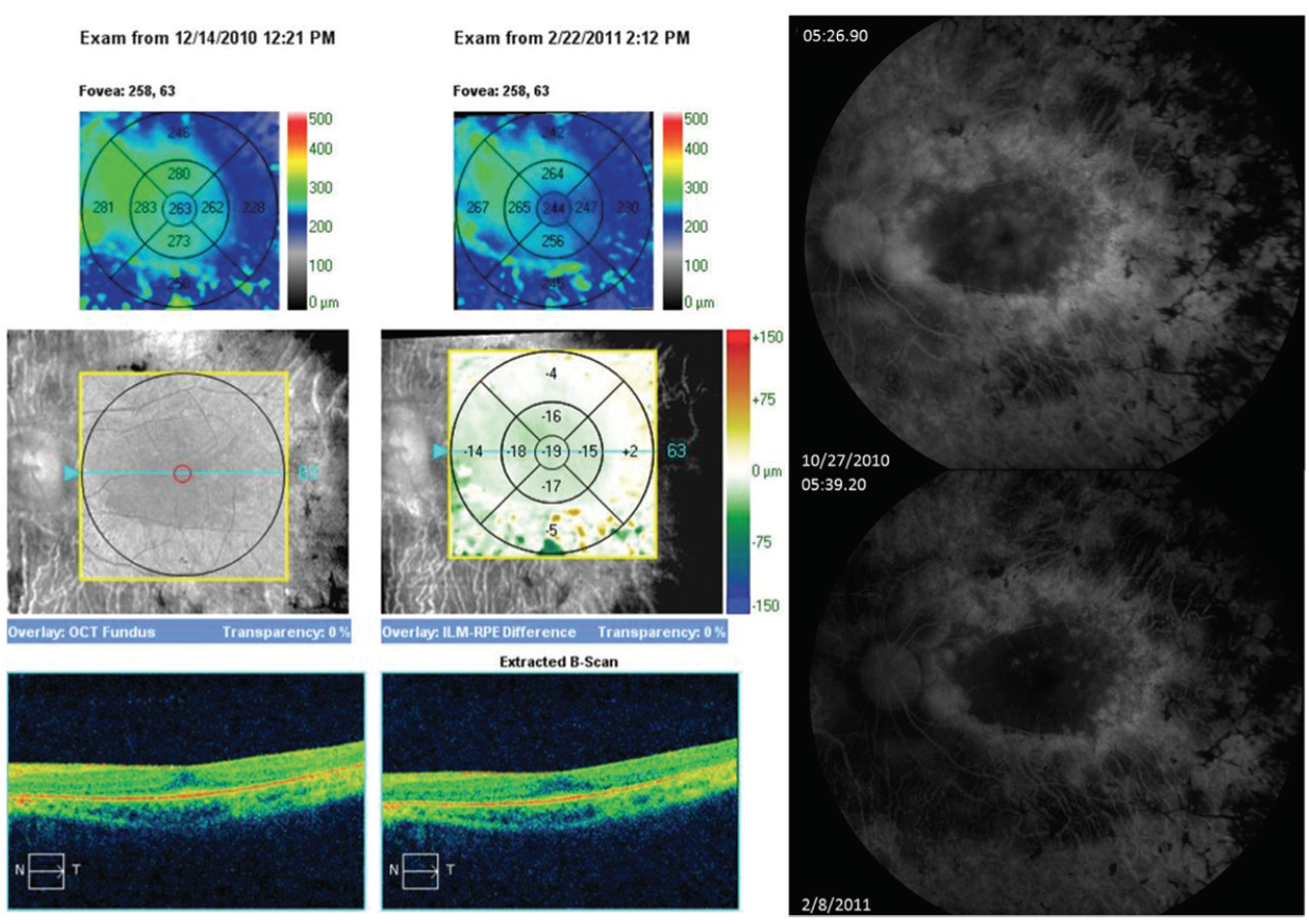 The FDA approved the Argus II for RP. The system utilizes glasses that capture images and wirelessly transmit the signals to the implant on the surface of the retina (Figure 4). This epiretinal implant contains a 60-electrode diode array, which transmits an electrical signal via contact to the retinal ganglion cells, which are relatively healthy in RP patients. The signals then travel to the optic nerve and the brain for conversion to an image. This product may only be used in advanced RP patients who are 25 years or older, have bare or no light perception in both eyes, and are pseudophakic or aphakic.

Figure 4. In the Argus II system, a receiver in the glasses captures images and wirelessly transmits these signals to a 60-electrode diode array. This epiretinal implant stimulates the healthy ganglion cells to send signals to the optic nerve and brain for image interpretation (A). A fundus photo of the Argus II Retinal Implant placed epiretinally (B).

The surgery takes approximately 4 hours and requires patients to return to the clinic for 2 months of training. Preliminary results from a phase 2/3 clinical trial by Second Sight gave light perception to no light perception patients and improved functional vision including door finding, object identification, and quality-of-life scores. The system will soon be available in select clinical centers in the United States in late 2013. The system is slated to cost more than $100,000, and Second Sight is currently working with Medicare and other companies for authorization approval.42-44

Another retinal implant has been developed by Eberhard Zrenner, MD, and colleagues at the University of Tubingen, Germany (Alpha IMS, Retinal Implant AG). A total of 21 people have received this subretinal implant, which contains 1500 photodiodes and the potential to see 20/1000 within an 11 x 11º field of vision. While a battery pack is needed, patients do not need to wear hardware; they see with their eyes and not through an external camera (Figure 5). The greater number of sensors carries the potential of improved visual acuity, but larger studies with longer follow-up are required.45 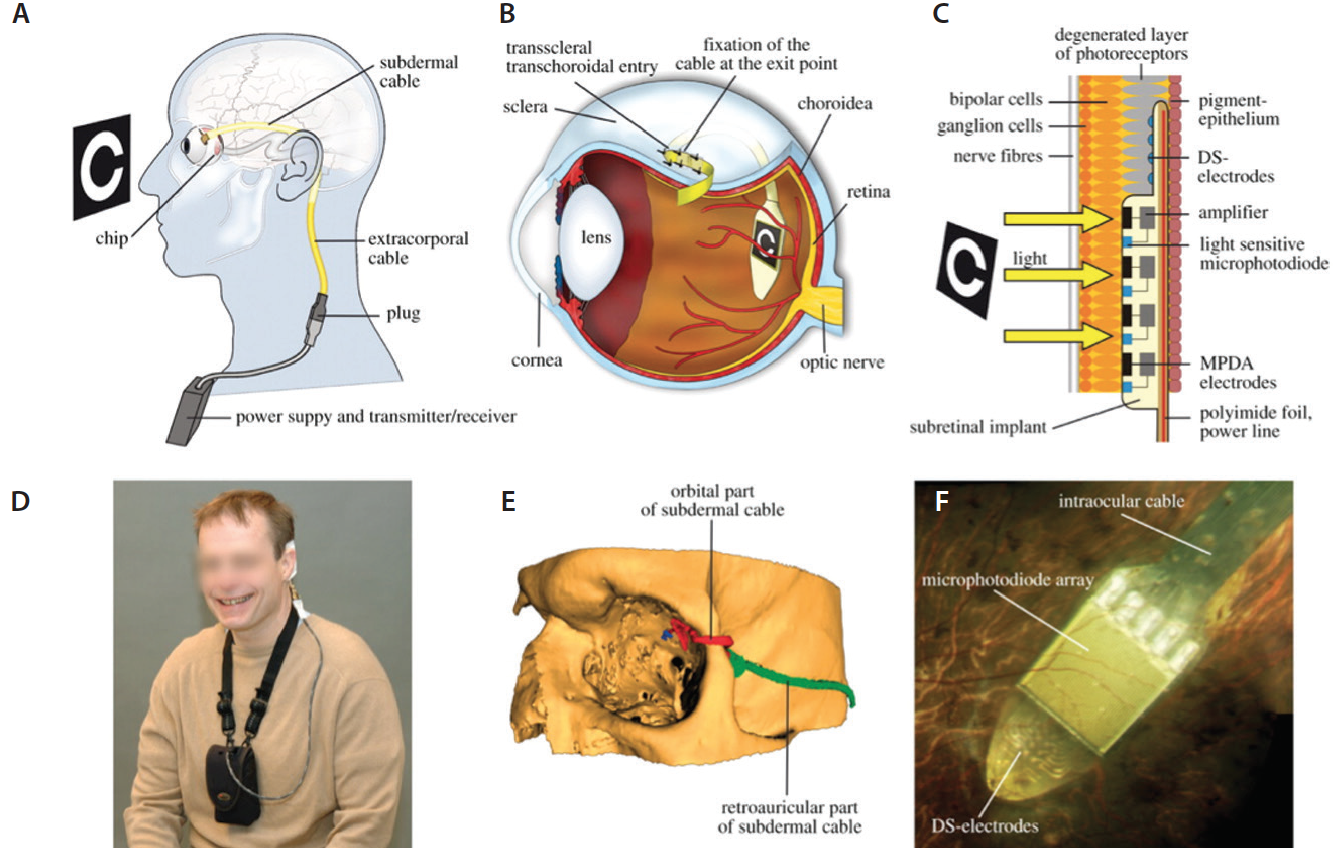 Modulating neurotrophic factors may play a critical role in the treatment of RP patients. The loss of cones late in the disease, for example, may be due in part to the loss of growth factors released by the adjacent rods. Cones do not express the genetic defects seen in RP. Photoreceptor transplantation, gene transfection, stem cell implants, and immune modulation are all areas of active research. As we identify more of the genes involved, and how to regulate programmed cell death, we will see a brighter future for patients with this disease.

8. Heckenlively J. The frequency of posterior subcapsular cataract in the hereditary retinal degenerations. Am J Ophthalmol. 1982;93(6):733-738.

John R. Heckenlively, MD
• the Paul R. Lichter professor of Ophthalmic Genetics and Ophthalmology, and visual sciences director at the Center for Retinal and Macular Degeneration at the University of Michigan, Kellogg Eye Center in Ann Arbor, Mich.
• financial interest: none acknowledged
• jrheck@umich.edu

GenSight Biologics announced that a phase 3 study of GS010 (rAAV2/2-ND4) in patients with Leber hereditary optic neuropathy (LHON) failed to meet its primary endpoint, with sh…

We use cookies to offer a better user experience and to analyze site traffic. To comply with the European General Data Protection Regulation (GDPR), we are implementing a cookie consent manager to provide residents of the EU/EEA with the ability to customize their cookies. Until this is available, your continued use of this site will be deemed as consent to use of cookies.